Ollie did his first nine holes of golf since his heart attack. He played a blinder!!!

Leave Mandurah and head to Swan Valley. We found the cutest tea rooms just up the road from the caravan park called Cottage tea rooms & Gallery – you have to try the lemon meringue pie!! Decided to walk off lunch at Bells Rapids. Lovely spot 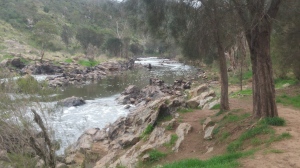 early morning walk. Then off to Midland in search of more wool for next project. We apparently walked 4K looking for Spotlight only to find they’d run out of the wool I wanted.

what a day – rain, wind and cold. Caught up with cooking and filling freezer with meals – 10 days of meals. With a break in the weather we went wine tasting at Houghtons wines then some chocolate tasting. Decided to take a look at Bells Rapids after the 40 ml of rain and managed a short walk in between cloud bursts 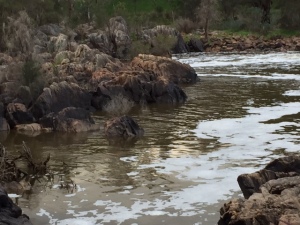 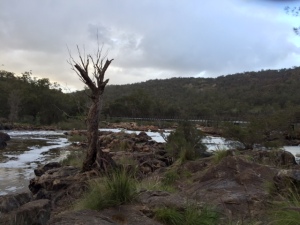 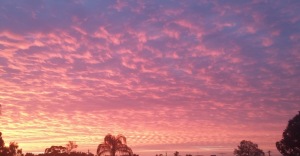 What a beautiful sunrise. We’d been told Guildford has some great little shops that you can spend hours browsing round. OK let’s go – mustv’e either gone to wrong Guildford or our eye site deceived us !!!!!!! Oh well – off to The tea rooms for more lemon meringue pie.

set off for Jurien Bay. Oh no – the noises are back with a vengeance!!!!!! Sounds like the rear end of the car is going to drop off. Find a Pedders suspension place – on peak under car and he says – “There’s your problem – the spring is on upside down!!!!!!!!!” 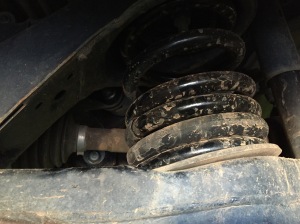 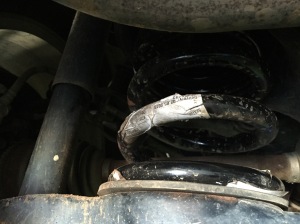 Troy rings Pedders in Joondalup where we are and tells them the spring is definitely upside down an to go ahead and replace it. Bl……dy chicken couldn’t ring Madam back and tell her!!!!

Seems the mechanics at Mandurah Mitsubishi can do the impossible !!!!

But wait – that’s not all – they originally looked at the car because of a knocking noise – told us there was nothing wrong. It wasn’t the back of the car we nearly lost – it was the caravan – the tow bar was nearly off the chassis!!!! SH one T – another lucky escape – someone is watching over us – but not Mitsubishi Mandurah

Time for some sightseeing now the rain has stopped. Walk along Jurien Beach

Fasinating old jetty – once used to export grain & bat pooh! Now used by cormorants and snorkelers. They have buried weird shaped concrete plinths all around it that have created a reef – didn’t test it out today!!

I’m sure I mentioned Ollie has now got himself a Fitbit – seems we have done 50k walking in 7 days. I think it detects his restless legs at night!!!! Cannot believe it

Wonder what tomorrow will bring???