Another 5am rise – and off to Zebedee Springs. I want a hot tub like this! I could have stayed there all day – looking up at the palms and the amazing sandstone rock formations. But all too soon we were off again. 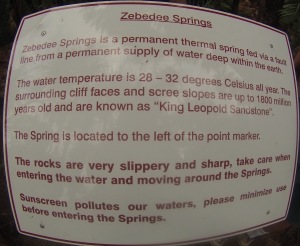 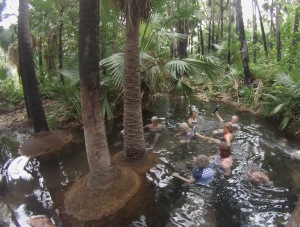 On the walk in to the springs 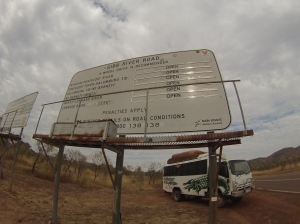 Just to prove we were really there 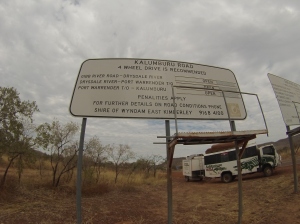 Onto Kununarra and first stop the Sandalwood factory. The growing process is weird – the sandalwood requires 2 host trees to develop properly. The oils are used in various perfumes as well as being used in those all important Mozzie coils & sticks. We stocked up on coils and some “splash” scent.

Then we went to an aboriginal community arts centre. I couldn’t resist a couple of metres of “bush medicine” pattern material. They had an amazing pen that read text in a book – it was all in aboriginal. You could move it anywhere in the book and it picked up the words.

From there we went on to the Hoochery factory – rum, rum, rum. We did a tasting and I was blown away – well it felt like it as it hit my throat – $258 for a bottle of special!!!

We went into Kunanarra – a town built because they they dammed the Ord river to create Lake Kununarra & Lake Argyle providing a channelled water source plains – creating a very fertile area for mangoes, sandalwood  and many other foods. Having set up camp in Ivanhoe CP we then went to Ivanhoe crossing over the Ord River.

On the way to Kununarra 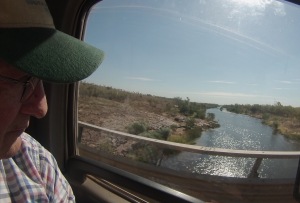 Or driver going into Kununarra 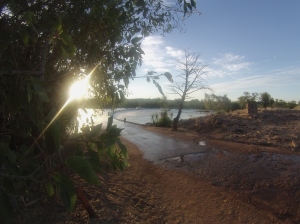 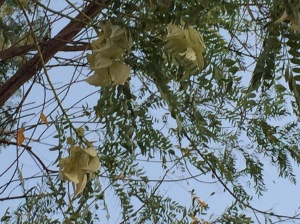 The dragon tree and flowers ( Judy I want one)

You guessed it – another 5am rise. Off for a flight over Lake Argyle, the diamond mines and Bungle Bungles. We had had some unusual rain yesterday and the sky looked rather “cross”. We flew for about 20 minutes and then returned to base. The weather had closed in and cloud & rain was covering the lake & the bungles 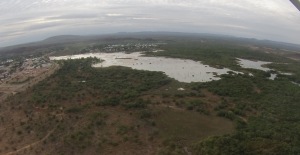 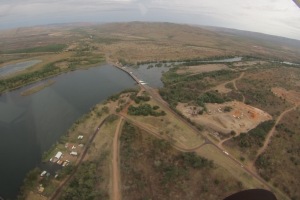 this chap visited us back at camp

We began to wonder if we are meant to do this flight. It is a present from our boys (Tim & Chris & families) – just before we left Broome the flight was changed because the float plane was out of service now the weather has stopped us – Still they rebooked us for 30th July when we return to Kununarra.

On return to camp we had some free time!!! First time in a week!!!! Caught up with hundreds of emails and great news we had sold some land in the UK.

What a great reason to go shopping – looked at diamonds in Argyle diamond shop – 2 pink diamonds – $366,000 !!! Next time. Bought a collapsible kettle instead!!!!

Delicious Barra fish supper on the BBQ –  Then the rain came – another early night.

Late start at 7am after an egg & bacon brekky. First stop the Zebra rock shop 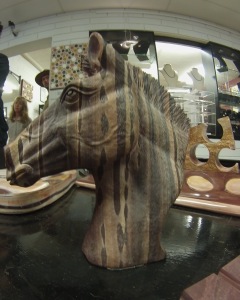 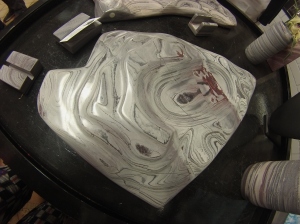 The piece of Lisagange stone I bought from Kevin the carver. I was in my element – so much beautiful raw stone – had to limit myself after I saw Ollie’s face – he has visions of the caravan floor falling through. The great thing is that instead of picking it up now and taking it on the bus we are calling in again at the end of the month to pick it up!!! Possibly with more???? 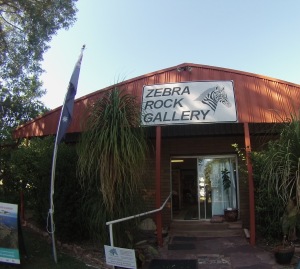 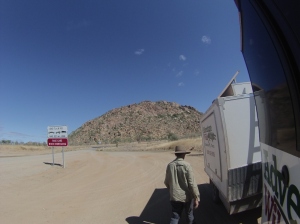 The entrance to the Argyle diamond mine – couldn’t find any !!!!!!